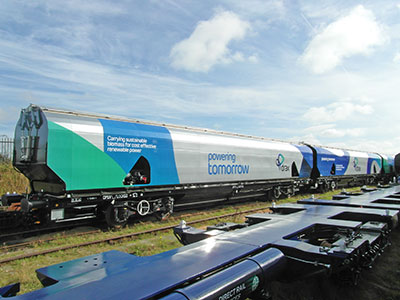 Mr. Davey said, “Our coal industry has powered Britain for more than a century, and today we’re seeing a clear roadmap for its future… by converting existing coal plants to cleaner fuels, or building state-of-the-art power stations that mean coal is truly clean.”

Drax Power Station consists of six 660 MW power units, giving a total capacity of just under 4,000 MW, making it the largest power station in the U.K. The company typically provides enough power to meet seven to eight per cent of the U.K.’s electricity needs, sufficient to power around six million homes.

Originally built, owned and operated by the U.K. Government-controlled Central Electricity Generating Board, the first three power units were completed in 1974 and the second three were completed in 1986. In 1988, Drax invested in flue gas desulphurization (FGD) equipment, making Drax the cleanest as well as the most efficient coal-fired power station in the U.K, according to Drax.

The U.K. electricity industry was privatized in 1990 and Drax then went through a series of owners until 2005, when the company became publicly listed on the London Stock Exchange.

In 2012, Drax completed an ambitious five-year £100-million ($170-million) project to improve the efficiency of its low-pressure and high-pressure turbines. According to Drax CEO Dorothy Thompson, “The low-pressure and high-pressure turbine modules of all six generating units have now been replaced and are operating as expected. This means we are operating at an overall coal-based efficiency for the power station of around 40 per cent, and through this upgrade alone we are reducing our CO2 emissions by one million tonnes a year. We have also taken the decision to upgrade the intermediate pressure turbines of the three generating units that will be converted to biomass. The first will be undertaken during 2014. This will deliver further efficiency improvement benefits.”

Biomass conversion
In an effort to reduce its environmental impact, Drax began burning biomass in 2003, evolving to co-firing coal and biomass in all six power units. In July 2012, the company confirmed its plans to transform itself into a predominantly biomass-fuelled generator by converting three of its six generating units to run exclusively on sustainable biomass. The first converted unit began operating in April 2013. The company plans to complete the second unit in 2014 and a third in or by 2016, dependent on securing the rights to sufficient sustainable biomass. Drax calculates that this will reduce carbon emissions by 80 per cent compared to coal – a saving of some 10 million tonnes of CO2 a year compared to levels today. When all three units are done, Drax will use seven to eight million tonnes of wood pellets annually.

Not only will Drax be cleaner but the conversion is central to the company’s future prosperity. The U.K. Government has introduced a carbon price floor (CPF) – a tax on fossil fuels used to generate electricity. It came into effect on 1 April 2013. The CPF for coal started at £0.44 ($0.75) per gigajoule, escalating rapidly to £1.63 ($1.77) by 2016, making the economics of coal power generation very challenging.

Total capital costs for biomass transformation will be in the range £650 million to £700 million ($1.1 to $1.2 billion), incorporating:

So far, Drax is pleased with the performance of its first converted unit – so pleased in fact that the company is now considering a fourth unit. Thompson said, “Evaluation of a fourth unit conversion at Drax is underway, including assessment of whether this would be best delivered through modification of our existing co-firing systems or investment in new bespoke facilities.”

The company is also on schedule with its U.S. projects in the U.S. Gulf region. Pellet plants are under construction in Amite, Miss., and Morehouse, La., as well as the port facility at Baton Rouge, La. These U.S. facilities will be operational by mid 2015.

Biomass transportation and logistics
Obviously handling seven to eight million tonnes per year of wood pellets is enormously challenging. Brian Greensmith, divisional head of optimization and logistics, said, “It’s a complex project in terms of engineering and construction, mostly in terms of scale.”

Biomass is a third lighter than coal but susceptible to rain, a problem solved initially by retrofitting roof components to old, open coal rail wagons (called rail cars in North America). The difference in density meant that a complete redesign to produce a totally new type of wagon was necessary. Thus, Drax decided to find help to design its own specialized wagons.

Graham Backhouse, head of supply chain and logistics, said, “We decided to commission Lloyd’s to look at designing a new rail wagon. One of the key objectives we gave them was to design a wagon that would carry as much biomass as possible. This was to be the industry leading wagon and even NASA would not be able to come up with a better one.”

To produce a vehicle capable of carrying the maximum amount of fuel, Lloyd’s had to squeeze control equipment, pipework, etc. into otherwise redundant areas of a traditional hopper wagon while designing a viable steel/aluminium roof that could be operated pneumatically and automatically. The discharge of the fuel is also controlled by a patented product flow control system.

Work on two prototypes began in January 2013 and presented the design engineers with a number of challenges in achieving the increased wagon capacity within the limits of the Network Rail loading gauge. At 18.9 metres long with top doors stretching 18.2 metres and bottom doors of 3.7 metres, the supersize wagon has a capacity of 116 cubic metres. This allows a biomass load weighing 71.6 tonnes. Its volume is almost 30 per cent bigger than any freight wagon currently used in the U.K. WH Davis, the last independent British freight wagon manufacturer, met this design specification by working to a measurement tolerance of 5 mm, the highest possible and half that normally associated with wagon manufacturing.

Drax has ordered 200 wagons, for which it owns the designs. Peter Emery, Drax’s production director, said, “Our transformation to become one of Europe’s largest renewable generators through the use of sustainable biomass means we need new, bigger and better rail wagons. We need to keep the biomass dry, move more of it and speed up the process of delivery.”

Drax has engineered an innovative and complex system of fuel delivery, handling, storage and reclaim for the wood pellets. After delivery to the site by train, pellets are automatically unloaded as the train passes, without stopping, through a dedicated multi-level unloading building incorporating a 15 m deep sheet piled basement.

The fuel is transported via a system of conveyers, most supported on steel gantries, to a maximum height of 65 m. A process building facilitates the screening of the fuel to remove oversized materials and ferrous contaminants. The fuel is then conveyed to one of four 63 m diameter, 50 m high storage domes, each one capable of storing more than 110,000 m3 of biomass.

Mrs. Thompson said, “We firmly believe that robust, mandatory sustainability criteria are vital to maintain and enhance public acceptance and ensure that sustainable practices are implemented.”

Final words
Drawing on its 10 years of biomass experience, 40 years operating the U.K.’s largest power plant, and the experience in executing its turbine upgrade, Drax appears to have completed conversion of its first boiler flawlessly. The Drax team expects that in its first year of operation, the biomass boiler will be at about 80 per cent availability, which meets its target.

The incredible size of this $1.2-billion project has to be seen to be truly comprehended. The Drax Power Station is the size of a small city. Construction is taking place on a huge portion of the site, at the three U.K. seaports, at the U.S. Port of Baton Rouge, and at its two large-scale pellet plants in Louisiana and Mississippi. And Drax has been able to remain operating and profitable as the project proceeds.

When the project is finished, Drax Power Station will likely be the world’s largest biomass generating plant, reducing emissions by more than 80 per cent relative to coal. In the words of Jason Shipstone, head of engineering, “We started design and engineering in 2011 and we started construction work in 2012. It’s been hugely enjoyable and as an engineer it’s a very cool project to be involved in.”

Originally published in Canadian Biomass – All rights reserved. Gordon Murray is executive director of the Wood Pellet Association of Canada. He encourages all those who want to support and benefit from the growth of the Canadian wood pellet industry to join. Gordon welcomes all comments and can be contacted by telephone at 250-837-8821 or by e-mail at gord@pellet.org.