Wood pellets are an upgraded renewable solid fuel which, if sourced sustainably, offer a low carbon-emitting alternative to fossil fuels. They are widely used for heating homes and businesses in modern pellet boilers1 and stoves. Pellets are also used as a substitute for coal in electric power generating stations.

This article will mostly focus on what are commonly called industrial wood pellet pellets that are used in power plants.

The industrial wood pellet markets have been growing at an annualized rate of about 1.66 million metric tonnes per year from 2010 through 2021.

As the consequences of climate change become increasingly obvious and more costly as a result of more frequent and more severe events globally, the pace of decarbonization will accelerate.  Wind and solar power coupled with massive energy storage solutions will become the foundation of power generation in many jurisdictions.  But it will be at least a decade, and probably much longer, before grid-level energy storage coupled with wind and solar generation, and perhaps the build out of new nuclear generation capacity, is sufficient to allow most traditional thermal generation from coal and natural gas to be eliminated.

There is a well-proven strategy that can bridge this gap.  That transition strategy is already a mainstay in some jurisdictions.  The strategy is based on the substitution of sustainably sourced pellet fuel for coal in existing coal fueled generating stations.  Between now and a future that is primarily dependent on wind and solar generation and massive energy storage sufficient to keep the electricity flowing at all times this well-proven and already deployed strategy will be an important component in how nations decarbonize their power sectors.

Asia and Europe, already significant users of pellet fuel, will continue to use significant quantities.  It is likely that other European nations that are seeking a way to lower the CO2 emissions from coal generation will follow.  Furthermore, other regions, such as Canada and the U.S., will likely promulgate policies that support this rational, pragmatic, and ready-to-use strategy.

As is shown below, if policies evolve in response to the increasing severity, frequency, and cost of climate change induced events, those policies, if rational and pragmatic, will lead to higher demand for pellet fuel.

The supply capacity of the pellet fuel sector in not unlimited.  It is defined by the limits of working forests for supplying sustainable feedstock to the pellet mills.  As is discussed in several FutureMetrics white papers, the limits to growth in the pellet fuel sector are based on the constraint that the managed working forests that supply wood to the users of forest products cannot be depleted.  The primary users of forest products are the producers of building materials, paper, packaging, and tissue.  Pellet producers use the by-products from those industries and also use logs that are unsuitable for those industries.

Current policies that support the substitution of pellets for coal already impose strict standards and rigorous third-party auditing that assures that the carbon stock in the working forests at the front end of the supply chain is not being depleted.  Future policy must do the same.

There is room for significant growth in the industry; but there are limits.  In other words, the use of pellet fuel in coal stations can only be a part of a much broader power sector decarbonization strategy.

So, what will this mean for the wood pellet export markets in 2022 and beyond, particularly in Canada?  The rest of this article looks to provide some insights on this topic.

Table 1 and Figure 1 show the exports from the major pellet exporting regions. 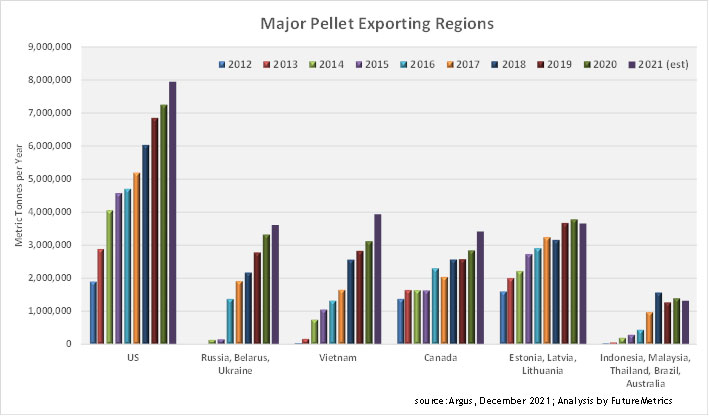 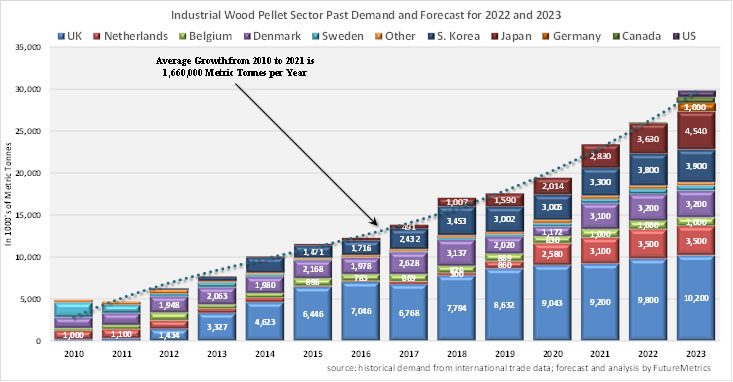 However, under a scenario in which U.S., German, and Japanese policy evolves over the next five years, demand for pellet fuel could grow at an annualized rate of 3.73 million metric tonnes per year. Figure 3 shows this scenario.

As FutureMetrics has discussed in its white papers (free to download from the FutureMetrics website), given the increasing frequency and severity of climate change-induced events, and given current policies for decarbonization in Japan and Germany, this is a plausible scenario if policymakers and the general public can be educated on the efficacy of substituting pellet fuel for coal and motivated to promulgate supporting policies. 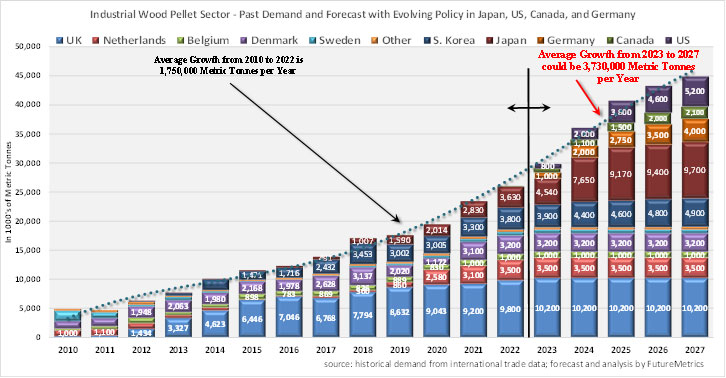 Figure 4 shows the historical and forecast of combined heating and industrial pellet demand.  The red line in figure 4 shows the estimated production capacity including all of the announced new planned capacity over the next two years.  As the chart shows, if policy evolves and pellet fuel demand follows the growth shown in figure 3, there will be significant supply shortfalls going forward. 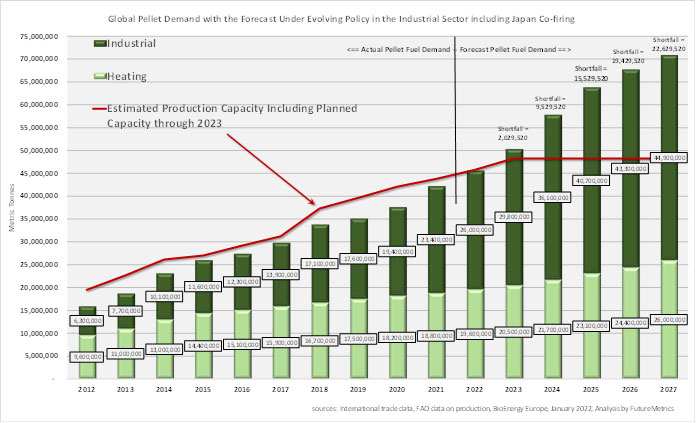 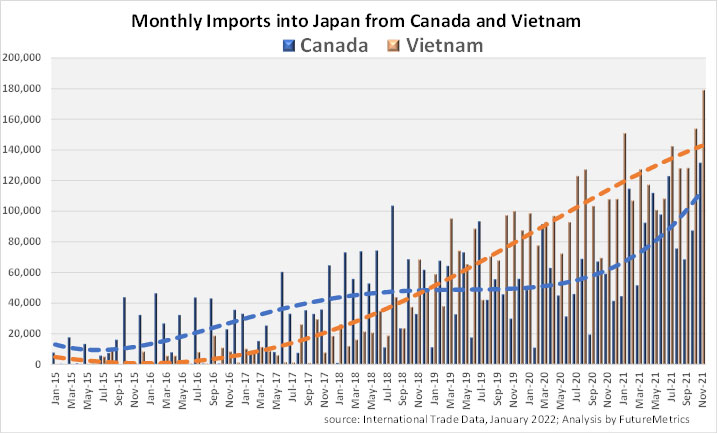 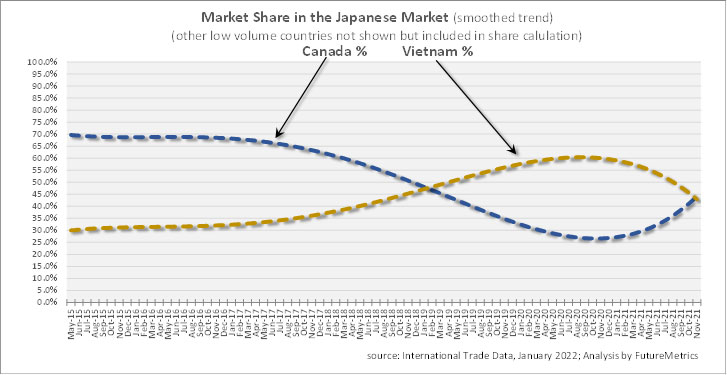 As long-term offtake agreements between Canadian producers and Japanese buyers ripen, Canada’s market share will increase. After Japan finalizes its sustainably and greenhouse gas (GHG) emissions criteria for imported biomass (probably before the end of 2022), it is likely that some Vietnamese producers will be challenged on the sustainability of feedstock. It is also likely that some palm kernel shell (PKS) imports will be challenged on issues related to palm oil production (for example, land use change and child labour). Longer shipping distance on smaller vessels may also promote a carbon footprint disadvantage. These influences will benefit pellet producers with strong sustainability credentials and optimal supply chain carbon footprints.

In 2021, the large U.S. pellet producer, Enviva, publicly announced offtake agreements into Japan in the millions of tonnes per year. Once those contracts ramp up, the U.S. will join Canada and Vietnam as major suppliers to Japan. To date, however, the U.S. has not been a significant supplier, as Table 2 shows.

Table 2 – Canada and US Pellet Exports to Japan

There is a likelihood for significant new pellet fuel production capacity to be developed over the remainder of this decade. Canadian producers with competitive fiber costs, globally respected sustainability credentials, and the potential for optimal GHG footprints from both the west and east coasts are well-positioned to be part of the supply build up.

Comparison of Pellet Export Trends: US and Canada

As governments around the world rush to implement policies that address the topic of climate change, Canada and the United States continue to emerge as two of the most prominent producers and exporters of high-quality industrial grade biomass for use in global energy markets. In terms of value and volume both countries have seen steady growth in wood pellet exports to the world in recent years.

In terms of domestic production, the massive disparity in number of biomass production facilities between the US and Canada appears to account for the greater price volatility of biomass observed in the US. Madison’s caught up with Gordon Murray, Executive Director of the Wood Pellet Association of Canada, who noted that the greater number of producers and higher added annual capacity in the US naturally create a more volatile market overall, while in Canada the smaller pool of producers and less additional annual capacity reduce volatility in a more mature overall market. Another factor according to Murray is the “lack of a real wholesale market in Canada’s industrial biomass sector, with most Canadian volume sold directly from producers to overseas power companies under long-term contracts”. He also anecdotally observed that spot cargo shipments of biomass are almost nonexistent in Canada but common in the US, reflecting the more robust wholesale market and higher volatility in the latter.

Prince George, BC-based Pacific BioEnergy Corp. (PacBio) has ceased operations at the company’s 550,000 metric-ton-per-year wood pellet plant in Prince George. PacBio announced plans in December of 2021 to permanently idle production at the facility, and company officials have confirmed its imminent sale. Richmond-based Pinnacle Renewable Energy – itself a recently-acquired subsidiary of UK energy giant Drax Group – will acquire long-term sales contracts for wood pellets, among other assets in the deal. Around 55 direct jobs are expected to be lost with the closure of the plant. A statement from PacBio noted the decision to shutter the plant was based on sawmill closures in the region, consequent reduced supply and increased costs of raw materials, and myriad logistical issues in the latter half of 2021 that inhibited the ability to transport pellets by rail to the export terminal in North Vancouver.

Residuals Back Up at Mills in Southern Nova Scotia

In late February a biomass power facility located in Nova Scotia’s South Shore region was taken offline after high winds knocked over its stack, causing extensive damage to the site. Sawmills in the area have been scrambling since to find another option to get rid of wood chips, bark, and other residual biomass from their operations which would normally be fired in the 30 MW Brooklyn Power plant to produce energy. Nine sawmills in the region sell the waste products of their processing operations to Brooklyn Power, and without a replacement market those residuals were piling up fast. A governmental representative recently commented that it was still too soon to know how long the necessary repairs will take to get Brooklyn Power up and running again.

Vancouver, BC-based Canfor Corporation recently announced a two-part agreement to sell its forest tenure, site, plant, and equipment in Mackenzie, BC, in a $70 million deal. The company has entered into a letter of intent (LOI) with McLeod Lake Indian Band and Tsay Keh Dene Nation to sell in regard to the associated forest tenure, while a separate agreement was struck with Vancouver, BC-based Peak Renewables for the Mackenzie equipment and other assets. Approval for the tenure transfer still needs to be granted by BC Minister of Forests, Lands, Natural Resource Operations, and Rural Development. Canfor’s Mackenzie sawmill produces Western-Spruce-Pine-Fir dimensional lumber. 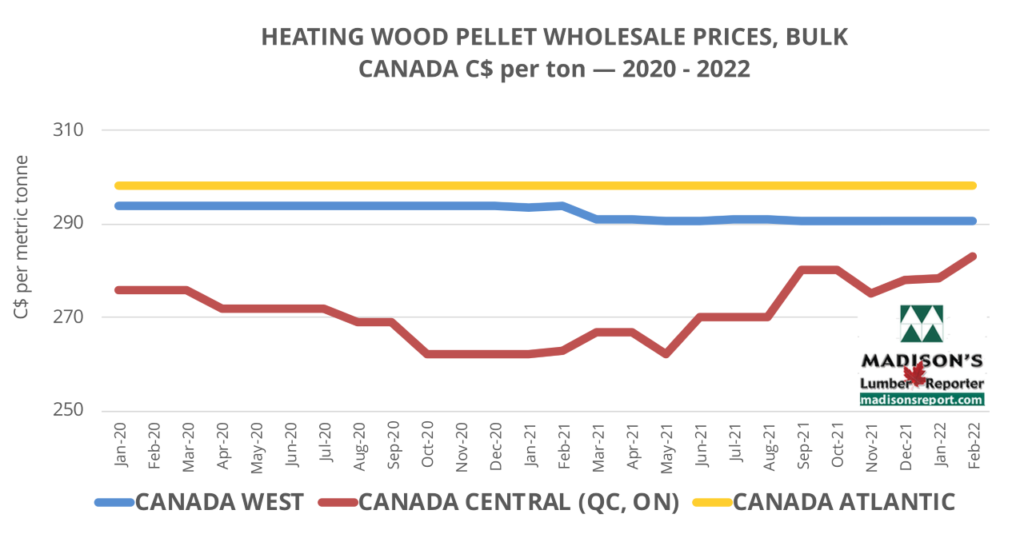 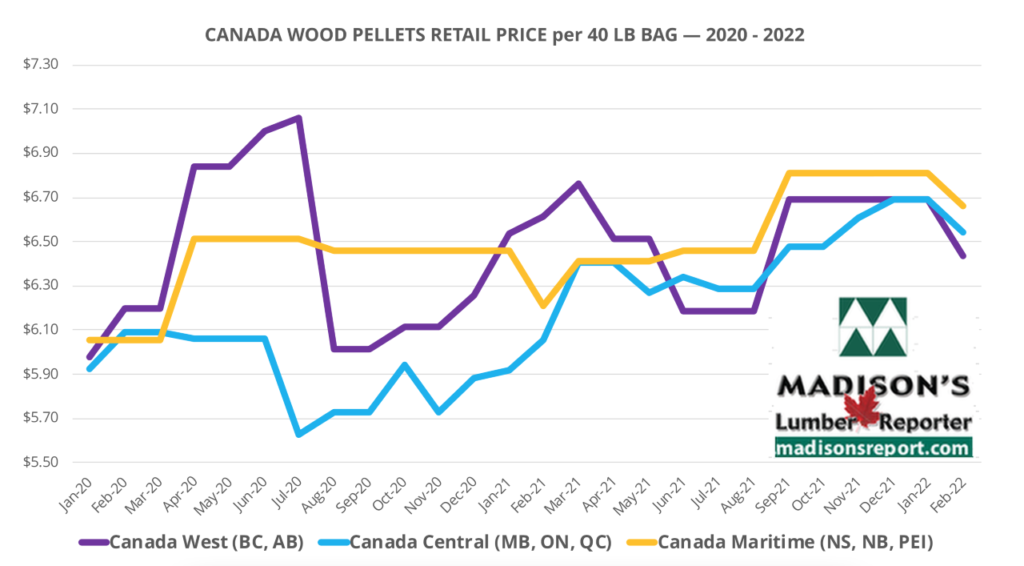